Silhouette of a spoonbill by artist Noelle Stillman

The roseate spoonbill is a native wading bird species found in South America, the Caribbean, and the Southeastern United States.  They use their bills to sweep the water while foraging for food, their nostrils being placed high on the base of the bill to allow them to breathe during this process. The story goes that early settlers mistook the spoonbill for a pink relative of the curlew, hence the name of one of Palm Harbor’s major thoroughfares “Curlew Road.”

Scientists speculate spoonbills get their distinctive pink and white plumage from their food: A diet high in shrimp means they in turn ingest the shrimp’s diet, which consists of an algae that creates red and yellow pigments called carotenoids. The bird’s beautiful plumage was in high demand for use in ladies’ hats in the 19th century, and by the early 1900s the spoonbill had become scarce. When the native plumage trade was outlawed, spoonbills slowly made a comeback in Pinellas County. Today, this distinctive bird can be spotted in and around such treasured Palm Harbor locales as John Chesnut Sr. Park, Steve Putnam Park, and H.S. Pop Stansell Park, the last of which overlooks St. Joseph’s Sound.  Enjoy a video from  Audubon Florida about the spoonbill here. 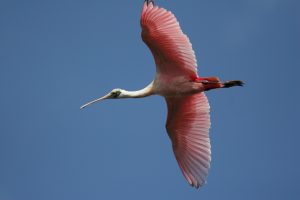 Are you a fellow nature lover? If so, please send any photos you take locally of flora and fauna to art@phlib.org and they may be featured on our website! 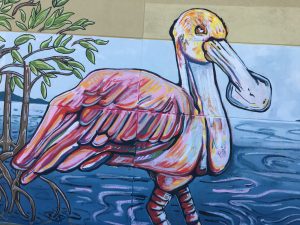